I am pleased to announce the release of Really Unusual Notruimp (R.U.N.T.) as an ebook through Master Point Press.  It can be found at http://ebooksbridge.com/www/ebb/index.php?main_page=ebb_product_book_info&cPath=138_136&products_id=489&zenid=74461e63cec3cbfb8ce16bed223d730e.  (The paperback version will be coming shortly, through Amazon and other sources.) 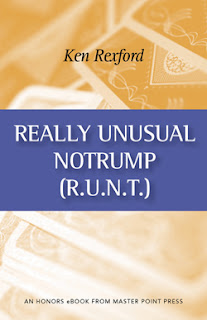 For those of you who know me, I have been using R.U.N.T. for about 20 years, and it is one of my favorite tools, mostly because it comes up constantly, meaning sometimes 6-8 times in a session.  More than just about any other call imaginable.

You might not know that the computer bridge program Jack also plays R.U.N.T.!  The link at ebooksbridge has a "sample" and a table of contents.  R.U.N.T. is not for the conservative among us -- it is clearly for the wild people.  But, there are many of us.  I hope you enjoy this.
Posted by Kenneth Rexford, Esq. at 8:53 AM No comments:

The Laws of Duplicate Bridge define a psychic call as "A deliberate and gross misstatement of honor strength or suit length."

A call is NOT a psychic if the definition given for the call is such that the person making the bid has not deliberately misstated strength or length.  There are many situation where a psychic would be called for, but the partnership can avoid the psychic occurring by defining the bid to include the "psychic meaning."  Why do this, though?

Consider a simple example.  White on red, partner opens Three Clubs.  After a pass, you bid 3NT, played as non-forcing and showing either a strong hand that thinks 9 tricks possible or a weak hand with club support.  Opener is expected to pass throughout.  You do this for two reasons.

Second, if you really wanted to play 3NT, you might induce a mistake by an opponent if the remaining points are stacked.  For instance, if you have 26 HCP combined, one opponent might have all of the remaining 14 HCP and bid, to his great discomfort.

By having a two-way meaning, each of which merits 3NT as a call, you protect both.  Two-way calls in such situations avoid unnecessary disclosure of values.

Similarly, consider a 2S response to a weak 2H opening.  If this is "spades, or hearts" and non-forcing, you cause problems when your intent is preemptive, but you also protect the times when you wanted to escape to 2S, as the opponents must bid against oth possibilities.

So, is this a "psychic control?"  I don't understand that term, frankly.  If a call is used to "show a psychic," then the "psychic" was not a "psychic" after all.  That is, unless the definition of the call did not include the "psychic meaning."  IMO, a "psychic control" is not really what it sound like.  Rather, it is a means of conventionally agreeing a meaning that is not otherwise allowed (which would be a GCC problem and not a psychic problem) or is a means of allowing non-disclosure of the true meaning, which is really a disclosure problem (and/or a failure to alert).

Thoughts?
Posted by Kenneth Rexford, Esq. at 7:20 AM 3 comments:

If you have been reading my new book, an idea might have popped into your mind.  If Overcalled bids Two CLubs as Crunched Cappelletti and happens to hold hearts and diamonds, and if Responder shows spade preference by bidding Two Diamonds, Overcaller might be tempted to pass Two Diamonds, at least in some situations (depending on vulnerability, seat, state of the match, scoring form, etc.).

This is something that you might want to discuss with partner.  If this is a possibility, then Advancer in some circumstances might want to give a false heart preference.  Consider, for instance, Advancer looking at a weak hand with 5-3-0-5 pattern.  Having heard Two Clubs, Advancer would normally bid Two Diamonds for spade preference, planning on playing in the major, whichever Overcaller-Partner has.  However, if Overcaller is allowed to make a "judgment pass" of Two Diamonds with both reds, then Advancer might opt to use a "judgment preference" himself.  With 5-3-0-5 shape, Advancer expects a huge likelihood that partner has the red suits.  He might be wrong, but the odds are high.  Advancer who playts with an Overcaller-Partner who likes the "judgment pass" could protect by showing "false heart preference."  If Overcaller-Partner has the expected red-suit two-suiter, this gets us to the right contract quickly.  If, however, Overcaller-Partner actually holds spades, or hearts and clubs, the contract will be acceptable but not ideal.

This might be cause for not allowing any "judgment" decisions.  But, as a person who once passed a Roman Two Clubs opening with 6-2-2-3 shape (it worked, as Two Clubs was the only makeable contract), I am also a realist.  So, I thought it a good idea to predict this "abuse" and to counter with the "abuse counter" of the "false heart preference."

By the way -- thanks to all who have already sent kind words about my book.
Posted by Kenneth Rexford, Esq. at 8:42 AM No comments:

My new book is now in stock at Amazon as a paperback edition, if you are interested.  I am pleased to see that it is already in the top 100 bridge books for current "sales rank!"  The price at Amazon is $11.95, with free shipping available.

If you get the book and enjoy it, please consider writing a review on these sites.  If you hate the book, get around to a review later!  ;-)
Posted by Kenneth Rexford, Esq. at 6:19 AM 3 comments:

The paperback version seems to be imminent.  A link to Amazon for notification when it arrives:

THe print version should be available in a few days.
Posted by Kenneth Rexford, Esq. at 9:36 AM No comments:

I have a new book coming out through Master Point Press in the next few days. Overcalling Opponent's 1NT. The topic generally is overcalling 1NT openings, but I use the theory to also develop applications for other auctions.

In Woolsey, for instance, you can handle (1) both majors with a probe as to which is better, (2) one-suited major, (3) major-minor, or (4) the double as typically major-minor canape longer in minor. But, the one-suited major is through 2D, which is not GCC compliant.

Using one of my proposed methods, you can have Overcaller handle (1) both majors with Overcaller defining which he prefers, (2) one-suited major without GCC violation, (3) major-minor, or (4) spades with a longer minor, all without violating the GCC and with retention of the double as penalty, if you want. If you then add in an artificial meaning for the double, you can handle much more than the Woolsey defense could handle, again all GCC legal.

If you add in the Multi used in Woolsey and in Multi-Landy (which I also out perform), you can handle (1) both majors, (2) major-minor, (3) major-MINOR canape, and (4) one major, all without giving up the penalty double! Of course, the penalty double could be added onto that to expand options even further.

I hope you enjoy. I have pasted in the Table of Contents to give you a feel for what the book will be about:

RESPONDING TO ONE NO TRUMP OPENINGS
99
Posted by Kenneth Rexford, Esq. at 10:14 AM 2 comments:

New Books are OUT!!!

After the final copy went to Ray Lee, I kept wanting to add more stuff. I keep having new ideas. This is frustrating, so I created this blog to release my angst.

I encourage folks to send me questions, comments, or suggestions, or just chat, if you have any. My email address is kenrexford@hotmail.com.

Writing the book took a toll on Ken